Another strong labor market report out of the US confirms that the economy is at full employment and labor shortages in many sectors are unlikely to be solved soon, which means inflationary pressures will continue to spread, in our view. All eyes now turn to the release of the minutes for the Federal Reserve March meeting, which is expected to include details on the reduction of the central bank’s enormous holding of Treasuries and mortgage bonds. The key figure will be the rate at which the Fed allows the bonds on its balance sheet to run off without reinvesting the proceeds. Anything above 80 billion dollars per month will be considered hawkish and may lead to a knee-jerk rally in the US dollar.

The sense that the Russian invasion may be entering a less catastrophic stage certainly helped, as did the pullback in oil prices after Biden announced massive sales of oil from the US strategic reserve to try and put a lid on energy inflation. The sharp rise in worldwide energy prices has been a source of trouble for the euro, given the bloc’s dependence on oil and gas imports. The Norwegian kroner sold off sharply on this latter news. However, lower oil prices did nothing to stop the scorching rally in emerging market currencies, led once again by Latin American ones.

This week, economic data is relatively light. The focus should be on central bank communications, as both the Federal Reserve (Wednesday) and the ECB (Thursday) will release the minutes of their respective March meetings. The Fed should validate the increasing tightening priced in by markets with a decided hawkish tone. The tone of the ECB minutes is more difficult to predict, but we expect to see a clear divide between the doves and the hawks, with the balance moving steadily in favor of the latter as relentless inflationary pressures become harder to explain away. This should be supportive of the common currency.

EUR: The March inflation report delivered another spectacular upward surprise at 7.5%, as the headline number blew away already high expectations, thanks mainly to the spikes in Spanish and German prices. The core index was more subdued at 3.0%, but the low weight assigned to housing prices in this index explains some of the quiescence. The lower oil price after Biden’s strategic reserve announcement certainly helps the Eurozone’s battered terms of trade, and that explains the euro’s rebound in recent days. However, a sustained upward trend in the common currency will have to wait for a more clear hawkish shift from the ECB and the prevalence of the hawks in its internal debate. We expect to see this over the coming weeks, starting with the release of the ECB March meeting minutes Thursday.

GBP: The main news of the week out of the UK was a positive revision to the fourth-quarter economic growth numbers, but markets roundly ignored this backward-looking number. Instead, the perceived Bank of England dovishness continues to weigh on the pound, which lost ground last week against most of its peers. This week is also light in data, and the focus will be on Bank of England chief economist Pill’s speech on Thursday.

CAD: The Canadian dollar ended last week lower against the US dollar, pressured down by the decline in oil prices. Earlier, CAD reached the highest level since November 2021, on increased bets that the Bank of Canada will begin hiking its key interest rate in 50bps increments to tame inflation currently running at levels not seen since 1991.
The Canadian economy expanded 0.2% month-over-month in January, in line with market expectations. This was the eighth consecutive month of growth, a slight acceleration compared to an upwardly revised 0.1% increase in December.
Friday will see a release of the March labour market report expected to show further improvements. Throughout the week, the Canadian dollar will likely continue being driven by shifts in commodity prices.

JPY: Last week was a wild ride for the Japanese yen. On Monday, it weakened on the back of rallying U.S. yields and touched 125.10. Two days later, the currency was dealing at 121.31! Yen buyers came out quickly, ahead of the Japanese year-end (March 31). The foreign subsidiaries of Japanese companies took advantage of the yen weakness by repatriating yen at an increased rate. By week’s end, the currency weakened again to the current level. Support for USD/JPY is at last week’s low of 121.31, and 120.00. Resistance is at 123.00 and then last week’s high of 125.10. 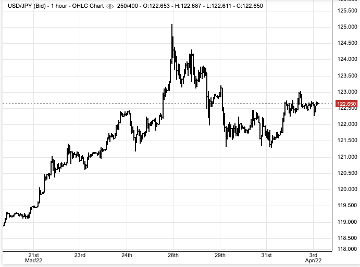 MXN: The peso has rallied against the dollar and is now back to a a major level, 19.8000. This support area has held since April of 2021. There was one break down to 19.5900 back in June of 2021, but since, it has been peso weakness. The Mexican peso will strengthen against the dollar if the U.S. economy is expanding. The market is now telling us that it will continue to expand, even as the Fed indicates their willingness to increase rates quickly. Keep in mind that the peso interest rate of 6.5% is 6.25% higher than that in the U.S. Buying pesos in the forward market will lock that rate in and does make peso buying attractive!

CNY: The Chinese yuan ended the week little changed against the dollar as a large portion of the currency’s initial gains were erased late in the week following reports of a worsening coronavirus situation. On Sunday, the country reported north of 13,000 new coronavirus cases, the highest level since the peak of the outbreak. It also announced it found a new iteration of the virus which has evolved from an omicron strain in a city near Shanghai.

Moreover, economic data throughout the week continued to disappoint. Thursday’s official PMIs showed the composite index declining to 48.8 in March, its lowest level since February 2020. Both manufacturing and service sectors came out worse than expected and below level 50 separating expansion and contraction, but the decline in services was particularly sharp, with the index declining to 48.4 from 51.6 a month earlier. On Friday, Caixin Manufacturing PMI did not buck this trend, dropping to 48.1 from 50.4 in February, far below expectations. We’re waiting for Caixin services and composite prints, out Wednesday, but so far the data points to the broad-based weakness of China’s economy brought on about by the new wave of the virus. Considering the prospects for April look gloomy as well we are likely to see more policy easing to cushion the blow.