Little movement in the dollar, while equities and interest rate yields bounce around. The big story last week was the CPI released on Friday morning. The market expected a high number, and the 6.8% annual increase matched the highest level in 39 years. Eyes are now on the Fed, which is expected to increase their monthly tapering, and some financial firms are forecasting the first-rate increase in March of ‘22. Followed by two more before the end of the year. Bulls are in control of the dollar, and we would expect that the greenback will continue higher to a dollar index level of 98.00, last seen February ‘20.

Limited economic data releases this week. Holiday markets will begin, which means less volume going through and as more experienced traders give way to the juniors, we will see more “quote and cover” activity. 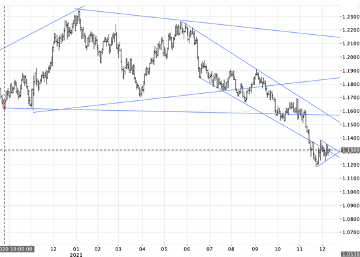 GBP (1.3245): The sterling has become a very difficult currency to forecast. It has been following the euro but does not have the same momentum. Trading against the euro is more important at this point. We do believe that the target for the cable is 1.3120 which should push the pound higher against the euro. Doing simple math, the forecast EUR to fall 300 pips and GBP to fall 135 pips. Advantage the pound! On Monday the BoE Stability report will be released although it should not have an impact on the currency, but any language that is not expected may push the GBP.

JPY (113.35): The yen continues to trade with a soft tone against the dollar, and other currencies. The dollar remains above the support area of 112.75. We have talked about the target of 116.00 and we remain bullish with the dollar. The tight relationship between USD/JPY and the 10-year U.S. interest rate will be the driver to the 116.00 area. The BOJ will release their interest rate statement on Friday, but there is no reason for them to change their current levels. Buy dollar below 113.00 and sell dollars near 115.00 and again at 116.00.

CAD (1.2725): Oil prices have moved above $70/bbl, even as China’s economy has slowed. Two ways to think about oil movement going forward: 1) Is the global economy going to continue to expand and drive demand or 2) will supply remain at its current levels? Remember that the U.S. is out of the oil supply business. If supply remains the same, then oil will recover, especially if growth continues. The Canadian dollar will rally, and it is our view that the currency should move below 1.2000 and potentially 1.1700 in the first half of ‘22. Any stall in growth can push the Canadian lower to 1.3100, but as we look at the growth versus supply, that is an outside chance. Buy Canadian dollars now and on any weakness.

MXN (20.9000): The peso rallied last week and frankly surprised us with the size of the move! The dollar fell below 20.8500 on Friday before leveling off at 20.90. We are happy with the move, because we have been encouraging clients to purchase pesos all the way to 22.0000. Those that have, and used forward contracts to match future cash flows, are feeling good about those cheaper expenses. The dollar will find support at 20.7500 this week, but the growing U.S. economy does give support to the peso! Remember, that the strength or weakness of the U.S. does inversely impact the peso.

CNY (6.3700): There is much happening in China these days. First, their latest GDP report shows a sharp slowdown. Their currency trades near its highest levels since the fall of 2020! The Chinese government is pushing to take back more control of their central bank. This will mean that they will even have more influence on the currency. Their concerns of a strengthening currency, while their economy slows down are real. Will this mean more intervention to keep the yuan from gaining too much strength? Probably. Which means that companies with Chinese expenses, should get some relief from the currency as it may begin to weaken as the Chinese government flexes its muscles within the PBOC.