The dollar spent last week waiting on Wednesday’s Fed minutes and Friday’s non-farm payroll report. The Fed did not surprise the market. They will continue to taper at the increased rate of $30 billion shaved off the monthly bond purchases which means by March QE will end and most likely a rate hike will follow in the same month, then another two rate hikes by the end of 2022. The dollar did nothing after the announcement. What did move was the 10-year yield, from 1.65% to 1.73% (the high print last year was 1.745%). Oil prices continued to rally, touching $80/bbl. on Thursday having dealt at $85.41 on October 24, 2021, before falling to $62.45 on November 28th! Friday’s employment report was a mixed bag. First, the economy gained 199K non-farm jobs versus the expectation of 450K. The unemployment rate fell to 3.9%. 95K workers left the work force and over 10.5M unfilled jobs remain. The dollar fell Friday afternoon even as the 10-year yield continued to climb after the report, ending the week at 1.76%!

CPI is released on Thursday this week, and it is forecast to print above 7%, which could be the highest level since 1982. Friday is retail sales, and that is expected to be flat versus last month.

EUR (1.1355): Last week we discussed the possibility of the single-currency falling to 1.1000, and even as low as 1.0500. We also said there is a chance, in the short-term, for the currency to squeeze out some weak shorts and move to 1.1400. That is happening now, and it provides a great opportunity for companies with euro balances to sell those into this strength. Longer-term, the current price activity is building a rising wedge, which is the technical pattern pointing toward 1.1000.

GBP (1.3595): The pound is trading just under the 1.3600 level, an area that is has traded near 3 times since January 5th. Hourly charts suggest that if it closes above 1.3600 there should be some stop-loss orders that will push it further toward 1.3650. The relationship between the euro and the pound is favoring the pound. The momentum will most likely support GBP against other currencies, including the USD. Trend line resistance at 1.3615 will be another hurdle. Above that, it’s 1.3700 and 1.3840. Support is at 1.3490 and 1.3450.

JPY (115.60): Last week’s high of 116.35 was the highest level that USD/JPY printed since January 2017! There is a holiday in Japan this week and covid is closing areas of the country. Combine this with the higher U.S. 10 year-yield and it should not surprise that the yen is weakening. Back in January of 2017, the high print was 118.60. We can say that as U.S. yields rise, the yen will weaken, and 118.60 is a longer-term level that should be reached. One word of warning, if the equity markets begin to fall (Nasdaq is under pressure), the carry trade will be unwound and that will bring buyers flooding back into the market. Yen buyers should be building their long positions between the current area all the way up to protect themselves from the possibility of further equity market declines.

CAD (1.2640): Oil touched $80/bbl. last week, and the Canadian dollar reacted. Last week’s low USD/CAD was as 1.2623. That should offer some support for the USD, but the short-term hourly charts are pointing to a 1.2600 print. The daily chart is mapping out a price target of 1.2325. Trendline support is at 1.2500. The low print in May of ’21 was 1.2025. Our opinion is that the Canadian dollar will continue to strengthen, even as the over all USD is forecast to strengthen. Keep that oil market front and center!

MXN (20.3500): USD/MXN is trading at a short-term support level. Last week, USD short-covering weakened the peso to 20.76, but that was met with buyers. Between the current level and 19.8000, there will be support for the dollar. The U.S. economy is strong and will most likely get stronger. This means that more products will be manufactured or assembled in Mexico and trucked back to the U.S. The natural peso demand will keep pressure on the USD and strengthen the peso.

Below is a chart of peso forward points. These reflect the interest rate difference between the peso and the dollar. On December 16th, the Mexican central bank raised rates 50 bps to 5.5%. The U.S. rate is 0.25%. That difference gives peso buyers a great advantage when hedging their future requirement. For example, with spot at 20.3500, the 3-month peso can be purchased for delivery at a rate of 20.6400. Delivery in the 6 month is 21.0500! When the market provides an opportunity to cheapen a company’s payables, it is prudent to take advantage of it! 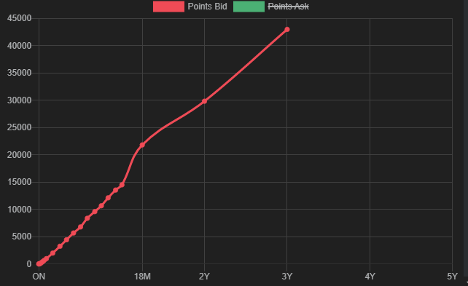