The dollar begins this week focused on geopolitical events after last week’s major rally through key resistance of the dollar index (DXY) at 97.50. It currently is dealing at 98.50. The next major level is at 102.50. (See chart below). The DXY is the most popular index when examining the greenback’s movement. We would add that it is heavily weighted towards the euro (57.6%) and does not include the Mexican peso or the Chinese yuan. Other currencies that are included in the index: JPY (13.6%), GBP (11.9%), CAD (9.1%), SEK (4.2%) and CHF (3.6%). In other words, although it is quoted in every media outlet, and discussed by every financial firm, it does leave out important currencies that are key to global trade.

What drove the dollar higher last week? The Russian bombing of Europe’s largest nuclear plant, in Ukraine, pushed the euro lower to 1.0885. While other currencies did weaken, the highly weighted euro fell the most as investors moved cash to dollar assets. The U.S. employment numbers were much better than expectated. The economy added 678K non-farm jobs (forecast was 420k), and the rate fell to 3.8%, which is just 0.3% above the 2020 pre-pandemic low of 3.5%. Another way to look at these results: The U.S. economy is back to where it had been and now it’s time to add jobs and grow the economy. There are over 10MM unfilled job openings in the U.S., so there is much more room to grow.

Oil prices have rallied to $115.00 / bbl., which will continue to drive inflation. The U.S. imports oil from Canada (51.3%), Mexico (10%), Russia (7.9%) and Saudi Arabia (5.4%) and there is pressure on the Biden administration to stop importing oil from Russia. They are apparently close to signing deals with Iran and Venezuela. What can go wrong? U.S. Treasuries bounced all over the map, with the 10-year closing at 1.73% and the 2-year at 1.49%! The spread between the two has shrunk from 1.6% last April to 0.24%. This flattening is a sign of the market pricing in a recession and should be watched closely. Finally, the Fed Funds futures contract is pricing in a 95% chance of a 0.25% rate hike by the Fed on March 16th. This remained steady throughout last week. Fed Funds futures are traded at the CME (Chicago Mercantile Exchange) and is fast becoming the “go-to” for Fed expectations. More attention is paid to this data than the Fed’s Dot Plots. It is also pricing a 93% chance of a 0.25% rate hike in June.

The week ahead does not offer much in terms of economic data in the U.S. Thursday’s CPI report will be the highlight. The forecast (Wallstreet Journal) is for a 0.7% month over month increase and the year over year data is 7.9%!!

One last comment on the market disruptions that are occurring. One of our team have been in these markets since 1987, the October ‘87 crash! Each time there is a disruption, a new technology, a new set of regulations and a new way to describe the market by talking heads will emerge. Bitcoin and other cryptocurrencies, along with blockchain, will be this technology. The speed it can be moved, and the ability for emerging economies to replace their currencies will benefit! With that said, great support for the Bitcoin is at 27,000. Forecasts for 100,000 and even 150,000 have been predicted by major financial institutions. 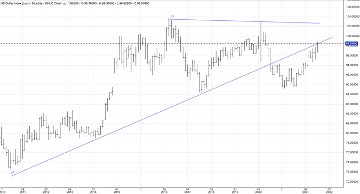 EUR (1.0860): The bombing of the Ukrainian nuclear plant pushed the single-currency to 1.0885. A bounce to 1.0940 held the currency and that will be the first line of resistance this week. 1.1000 and 1.1050 may also come into play as levels to sell the euro against. Support is last week’s low, followed by a medium-term trend-line at 1.0800, which originated from the 2017 low of 1.0339. Oil and natural gas prices are driving inflation higher across the globe but is hurting Europe because of the pipelines that move them through the Ukraine. The ECB will discuss in the middle of the week. Last week European stocks fell 7%!