Inflation data last week continued to point to higher prices and is now at a 30-year high! The U.S. yields rallied all week, with the 10-year ending Friday at 1.58%. The dollar continued to rally, with all data supporting a further extension higher. The week ahead will focus on U.S. retail sales, U.K., Euro area and Canadian inflation data. U.K. retail sales round out the week. We should watch these retail sales numbers closely; a sustained recovery is at risk with these higher costs cutting into the consumer’s pockets.

The Fed is now under pressure to increase rates sooner than had been expected. Some are suggesting that a rate hike before June (end of tapering) is on the table. Fed fund futures are now trading with a 48% probability of the early rate hike and a 68% chance for another in Q4’22. Again, these probabilities do support a further move higher in the U.S. Dollar! 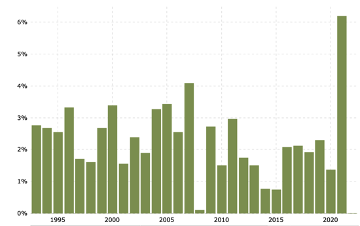 EUR (1.1445): The euro is under pressure as it has been for the past several weeks. Our short-term view is that the single currency should continue to 1.1350 before any recovery. Given the ECB’s hesitancy to begin its tapering policy, while other major economies have begun or have announced their future rate hikes. There is an outside chance that the currency can fall to 1.1000!

Resistance is now at the 1.1500 and 1.1550. support at 1.1350 and 1.1275. For U.S. exporting companies that have missed the chance to sell their euro higher, respect the resistance levels and be prepared to sell against the levels!

GBP (1.3420): Unlike the euro, the BoE’s Bailey has discussed rate hikes in Q1’22. The sterling has been under pressure, but that is more likely a reflection that the central bank didn’t confirm details at their last meeting. We are not sure that there should be such pressure on it because there wasn’t a more direct statement. We are looking for a rebound, specifically toward the 1.3550 area. Be ready to sell pounds near that level. The downside is defined at 1.3380 and 1.3300. The speed of central bank rate adjustments will be the major contributor to the direction. Nothing new there, but for corporate treasurers being prepared to sell against 1.3550 or buy at 1.3300 should be most important.

JPY (114.00): While the equity markets continue to make new highs, the need to fund that move, by selling yen, has slowed. The driver this past week was the increase in U.S. yields. If this continues (we think so), then the dollar should continue to rally against the yen. We are looking for 115.50/116.00! Paying yen expenses with this weak currency is having a positive impact on margins and saving cash! Both are the two most important aspects of managing currency risks.

Last week we thought 112.85 would hold, and that level did contain yen strength. Keep that level in mind if the dollar does fall in the next couple weeks. But that is not our view!

CAD (1.2550):  Oil prices dipped below $80 last week but did recover to end near above $81. Commodity prices are nearing all-time highs. Goldman Sachs is looking for oil at $90, by year end, with an outside chance of $110. They are looking for commodities, such as cooper, to continue higher as well. Their favorite trade is to be long the Canadian dollar! How can we argue with that? Especially because it fits our view!

1.2700 is a great level to sell U.S. dollars and buy CAD. Of course, building a core “long CAD” position, utilizing the GreenShootsFX account is always advised!

MXN (20.5000): The peso continues to hold its own against the dollar. Demand for the currency, along with their high interest rates, are supporting it. But we are going to forecast USD/MXN to rally to 21.50 by year end. The overall dollar strength may be too much for the peso to overcome. Negotiations that are happening between the Biden administration and the President of Mexico may begin to slow the flow of immigrants that are moving into the U.S. This should prove a positive for the White House as well as the dollar. Peso expenses are going to get cheaper and leaving orders above 21.00 to buy pesos and sell USD is a terrific way to capture this next leg of the dollar rally.

CNY (6.3800): Nothing new here. The current range of 6.35 / 6.40 remains solidly intact. One development that we think may have a positive impact in the current political environment, is China’s acceptance of the latest changes to Boeing’s 737 Max. This may open up some further trade opportunities!