The dollar pushed higher through an important resistance area, opening for a further rally. Yields on U.S. treasuries moved higher, again, considering the transitionary inflation lasting longer than originally thought. The Fed’s Powell said inflationary pressures are more difficult to pinpoint. Minnesota Fed chairman (non-voting) Neel Kashkari believes short-term interest rates can remain where they are for several more years and he does support the tapering of bond purchases. The market is confident the Fed will begin that process on November 2nd or 3rd.

We begin this week with the 10-year at 1.46% after printing a 1.55% level last week. One last thought, the U.S. debt ceiling debate is at full speed with Janet Yellen testifying there should be no debt ceiling stating that it would self-correct, once the $3.5 T spending bill is passed and the economy continues to recover. This may have been the reason the yield closed the week 9 bp lower than the high 1.55%.

This week will be defined by the spending bill debate, the debt ceiling argument and Friday’s employment report. Forecasts are looking for an increase of 485K non-farm jobs.

We discuss interest rates when reviewing and forecasting currencies. Why? Theoretically, the higher interest rates a country has, the stronger the currency because investors look for yield. Below is the most recent comparison of 10-year yields across major economies. 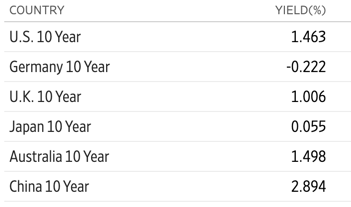 EUR (1.1590): We have targeted the 1.1600 area the last couple weeks which was quickly reached last week and did not offer much in terms of support with a low of 1.1561 and we expect that to give way and now look for euro to trade 1.1450. Payments to Europe are now much cheaper than companies faced early in the year. Although we can’t say that the 1.1450 level will be near a medium or long-term low but compared to the 1.1900 area that was dealing in early September, this is a much-needed level for euro expenses.

Euro daily chart: measuring the break-out of the triangle targets 1.1450.

GBP (1.3550): Last week sterling fell to 1.3414 (we targeted 1.3400) before bouncing to the current level. We remain bearish on GBP. Our next target is 1.3100. What is behind this move? It is all about dollar strength, and less about a specific issue with the U.K. economy. The coming week has no economic data, so the trading activity will be more focused on technical levels (support is last week’s low of 1.3414) and resistance at 1.3600, which was the important break-out level.

CAD (1.2640): The struggle between the stronger dollar and higher oil prices has the Canadian dollar struggling to make meaningful headway. We will say this (and may have in the past) but the Canadian is a currency that can trade in a range for a long period of time, nearly putting the trading community to sleep, and then it will move quickly and in a more pronounced trend. Corporate treasuries must understand this and build their “next year” forecasts to incorporate a long-term view and accumulate their hedges while the currency is in the consolidation phase. The employment situation will be released on Friday, and if an outsized miss or improvement around the 90.2K forecast, can push the Canadian into its next trend.

JPY (110.85): USD/JPY printed a new high for the year at 112.08 (previous 111.65) but that did not stop the yen buyers from quickly pushing the dollar back to the current level. The big question facing the currency is if the USD/JPY the last two years of a higher dollar will ultimately lead to a break down and a move back to 106.00. Yen buyers should be adding forward contracts at the current levels to take advantage of the weaker yen.

Daily USD/JPY: the rising channel may lead to a lower dollar, but we cannot get too confident until the 109.50 area is reached.

MXN (20.4200): We have been calling for the peso to strengthen against the dollar for some time and the currency just makes us wrong! Last Friday the dollar rallied to 20.72 before falling back to the current level. Again, nothing specific going on with the Mexican economy. Although, there may be some negative impact from all the migrants passing through from Central America and Haiti. Resources are needed to try and protect and care for them. Manufacturing in northern Mexico may be impacted and of course the maquiladora business could be facing a slowdown.  If a company has not hedged their peso expenses before, then this peso level should be even more appealing.  Layering these hedges at a spot of 20.4200 improves the average of current hedges and improves margins while saving cash.

CNY (6.4300): The trading range for the Chinese currency hasn’t changed much, remaining between 6.4000 and 6.5000. But, this week, as the dollar staged a strong rally against most currencies, it lost ground against CNY. Question to be decided over the next quarter or two: is the dollar being challenged by the yuan as the more socialist policies in the U.S. are unfolding? President Biden has nominated Saule Omarova for Comptroller. She was educated at the Moscow State University, on the Lenin scholarship, and hates banks. She believes the government should be the lender, not a bank. You cannot make this stuff up! We bring this up in the China section because these types of outcomes will knock the U.S. down the economic ladder and prop up China!