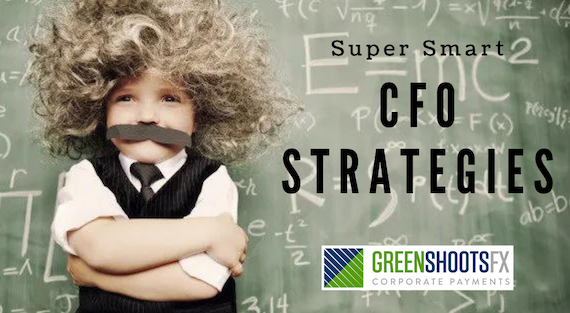 Surprisingly to many business owners, finance directors, and CFOs that we meet, the word “hedging” has a less than positive connotation, which is most likely because it brings to mind high-risk or complicated hedge fund strategies.

But with the right partner, a currency hedge is a straightforward management practice for reducing or eliminating foreign exchange (FX) currency risk. Think of it being like an insurance policy a company can buy that results in protecting profits from FX movements.

When a U.S. company commits to a future transaction where foreign currency is paid or received, that company runs the risk of losing money if the value of the currency changes before payment is made or received.

A smart CFO knows how to mitigate this risk, tailoring their approach to the specific countries or regions in which their companies buy and/or sell.

If you’ve been paying attention to the USD FX rates versus most currencies during the first two years of Covid you’ll see an immediate strengthening of the dollar (March 20) followed by a period of weakening, making imports more expensive. In recent months the dollar has gained strength courtesy of a number of factors, chiefly involving Russia’s unprovoked attack on Ukraine. This volatility, which has happened on many previous occasions saw a USD v EUR rate decline from 1.06 (March 16th, 2020) to 1.22 (May 27th, 2021), to 1.04855 (April 28th, 2022) shows the importance of having a partner who will help you plan ahead. Did you receive such a phone call at any point in the last 12 months to discuss how a changing rate had the potential to wipe out profits? Did you get the call to explain why now could be a good time to take advantage of the forward market?

The previous 12 months had the potential to be kind to exporters. Invoicing an overseas buyer $100,000 in March 2020 would have cost your client €94,340 whereas that same invoice mid ’21 would cost them €81,967 which would have been a heck of a cost-saving for your German buyer. Today your invoice would cost them €95,367. Congrats, you just increased the chance of buyer default, or maybe didn’t win the bid in the first instance (for the sake of clarity, that was sarcasm yet still a true comment!).

But, despite exporters becoming more competitive in their bids the exporting CFO could have taken advantage of improving their bottom line by invoicing in euro. In the above example, a buyer had been used to paying almost €95,000 two years ago and a CFO who continued to invoice €95,000 would generate a sale valued at $115,900 instead of $100,000. Ideally, from a competitive viewpoint, meeting somewhere in the middle such that both sides can benefit, would be best.

One of the ways an importer could have prepared is through a currency hedging tool such as a forward contract, where the importer simply buys currency today for delivery at a pre-determined date, later. When a U.S. company buys a forward for foreign currency, it is locking in its FX price and eliminating the chance of losing money if the market price of the foreign currency rises by the time the company needs to buy the currency. Forwards typically can be secured up to 12 months in advance, and in some cases out to 24 months.

The other advantage of a fixed dated forward, and a window forward, is that it provides the CFO with a known cash flow in their currency, which may further reduce cost because they can see what facilities might need to be drawn upon and can determine which might be the most cost-effective with time to spare. 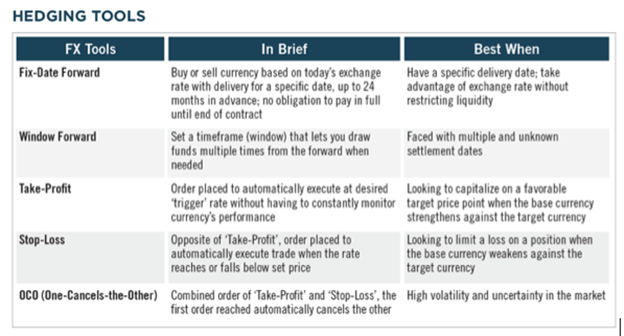 Most U.S. companies that buy forwards will make purchases with foreign currencies. But forwards can also be used by exporters selling abroad that know they will generate a given amount of revenue in a foreign currency in the future. Particularly useful for US exporters with a strengthening dollar.

Currency hedging also provides secondary benefits. In the past, U.S. companies commonly avoided the FX risk of making purchases in a foreign country by paying with only U.S. dollars. The downside to this approach is that the foreign seller can pad its U.S. dollar price, as much as 5 percent to 10 percent, to protect itself from currency risk.

When a U.S. company can make its purchases in the local currency, it’s more likely to get a better price. A U.S. company can ask for a dual-currency invoice—in both the foreign currency and the U.S. dollar—and pay in the currency that is most financially beneficial to the company.

CFOs can also employ currency forwards to lock in budgets for overseas operations, buying the foreign currency with ‘Forward Contracts’ when the overseas budget is set. In this way, forwards prevent planned costs from shifting against volatile exchange rates and help CFOs better manage their cash flow since only a small pledge of collateral is due when booking a forward contract. A business can buy currency forwards to create partial hedges, with contracts that buy half of the expected foreign currency future outlay, to hedge half of the risk, while buying the remainder of the currency on the spot market.

Additionally, finance chiefs can use market orders to buy or sell currency at a set price and within a defined time period to take advantage of shifting exchange rates, in particular, when outside of business hours. A market order simply sets the maximum or minimum price at which you are willing to buy or sell.

A few real-world examples illustrate the power of these tools, which are based on a careful mix of planning and automation:

A U.S. company has an office in London, where it pays its employees in British pounds. At the beginning of the year, the company figures its twice-monthly payroll costs for the next 12 months. Then it buys forward contracts for British pounds to cover 50 percent of its payroll on the 15th day of every month, locking in half of its FX costs for the UK payroll. For the other half, the company buys the pounds on the spot market when needed.

A company sells large, specialized machinery to the construction industry in the U.S., buying its product from a European supplier. It pays the supplier for machine in three installments: one payment upfront, a second when the machine is 50 percent complete, and a final payment when the machine is complete and shipped. Because of the uncertainty of the exact settlement dates, when the company lands a contracted sale, it buys three window forward contracts for Euros. Delivery is scheduled based upon the three payment due dates to protect the company’s profit margin.

A large tech company based in the U.S. has extensive operations in Asia and a cash-rich balance sheet. When it sets its budget with monthly outlays for its Japanese business, it buys the yen it will need for those operations on the spot market instead of through forward contracts. Even though the company won’t need the yen for months, buying on the spot market and holding funds until needed, is another way to mitigate future currency risk— though it does consume cash at the time of the spot trade instead of delaying full payment, which a forward contract allows.

A car manufacturer based in the U.S. buys components monthly from several suppliers in Europe, paying them in euro. For a given month of payments to the suppliers, the company knows the total amount due to three months in advance. The manufacturer uses market orders—a “take-profit” order and a “stop-loss” order during the three-month period—to buy the euro it will need for the payments. It sets the take-profit order at a specific favorable price, so the euro are purchased if the market price improves to that level. If the euro market price further declines, the stop-loss order will buy the currency at another specific price before the weakening rate movement eats into company profits. Once either of the orders hits, the firm can pay for euro, if they have the cash on hand, or roll them into a forward for future delivery.

The foreign currency market is the largest marketplace in the world and while currencies are a commodity, the level of services and capabilities offered by FX providers varies widely. These are a few of the aspects that CFOs should consider when selecting a foreign exchange provider: 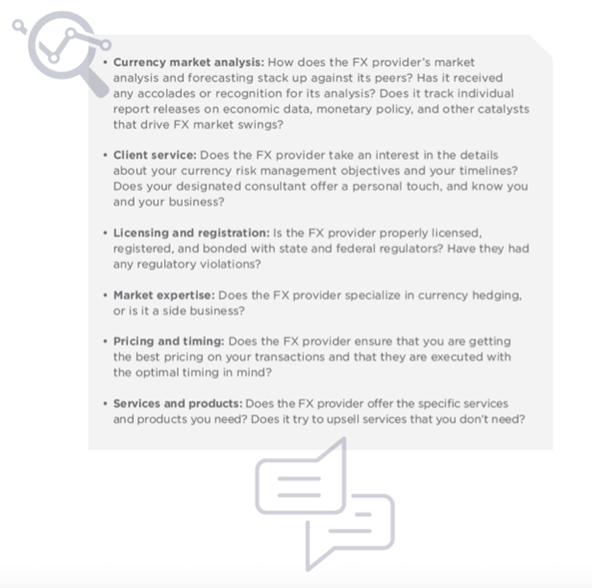