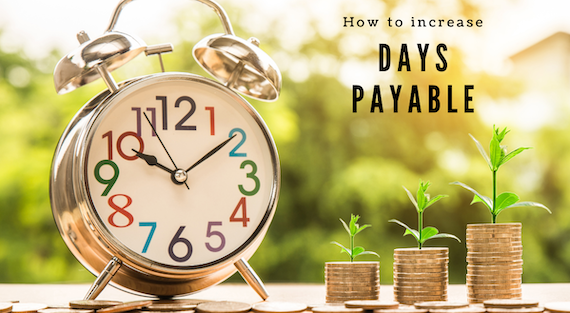 How to increase your Days Payable

Would you starve yourself of food? Or oxygen? Or maybe of a good time?

No, you wouldn’t. Or at least you shouldn’t! But you might be starving your company of cash flow which most likely requires you to turn to your bank provider and draw down on your expensive revolving credit facility.

The next question should be easy enough to answer; wouldn’t it be great if you could increase your days payable to international vendors?

Statistically, as an American based business, you’re most likely paying your global suppliers in U.S. dollars and not in their currency. Why am I so confident? Regretfully, we’ve met enough businesses who do. Far too many, in fact. And it’s alarming when compared to the best practices adhered to by your competitors in Europe, which is, as by now you have read, to pay your global vendors in their currency.

Hands up (unless you’re driving or performing some kind of task that requires both hands) if you think your supplier in Germany actually wants U.S. dollars? Tut, tut, tut. Please return your hand whence it came, strap in, and enjoy the next few minutes of education. If your manus did not thrust upward then use it to pat yourself on the back, because it’s likely you’re not causing

So, ‘no’, your German friends do not want U.S. dollars because, and this is a weird one, in Germany they are a nation of euro users. I know, I know. Shocking, right? How dare they convert your lovingly paid dollars into their local currency such that they can pay their workers, utilities, loan interest, and taxes.

In fact, the Germans are not alone. Oh no they are not! A recent survey showed that 95% of U.S. dollars paid internationally is converted into the local currency of the beneficiary. And, in doing so, most of the time at poor FX rates.

Are you securely strapped in? OK, let’s bash through this so you can quickly change your behavior and become a hero to your senior management and the Board.

Firstly, yes, you are overpaying. Why? Because your German seller wants euro and uses their bank’s crappy FX rate to calculate the dollar figure you wanted. This already inflated figure is then boosted even more by the vendor because when you finally they pay they don’t want the rate to have moved against them in the meantime such that they receive less euro than they initially wanted. Typically, the cost to you (well, your shareholders really) is 5-7% of the dollar value.

Secondly, you do have currency exchange risk because each month when you request an order the German vendor uses the prevailing FX rate at that time. So, one month you could pay $150k, the next $155k, the next $153k, and so on.

As this stage asking for a dual quote (i.e. one in euro as well as dollars) means you just saved your company around 7%, and by bringing the FX risk in-house it can now be managed using forward FX rates. So, you’ll fix the rate today for delivery at the agreed terms (and maybe think about hedging for each of the next 12 months).

Lastly, and effectively the real reason for this blog, because your German friends are being paid in dollars AND because they have the outright FX risk they therefore want to get paid sooner rather than later. Ever wondered why your request for 90-day terms is always rejected?

Agreeing the price in euro now means your vendor only needs to worry about the risk of you not paying, and not the risk that a weaker dollar will result in less euro for them. You can now pay them in 30, 60 or 90 days and the result for them is the same value of euro each time.

So not only did you save your company money, manage risks that were hidden, you’ve single handedly reduced bank borrowing and improved overall cash flow.

Take our 60-second challenge and never look back.