The dollar rallied last week as the news of the Russian invasion of Ukraine became front and center. No currency was spared. The euro, as expected, fell quickly as the war became real. The pound also took an immediate hit. The Russian Ruble was absolutely crushed. Countries around the globe sanctioned Russia in nearly every way possible. The current level is 83.90 Rub to the dollar. Compare that with 32.50 in 2014 and 23.00 in 2008. The EU, U.S., Canada and the U.K. plan to cut some Russian banks from SWIFT, the international messaging system used to communicate and make global payments. The weak RUB will drive inflation much higher in Russia. Sunday evening, Putin put the Russian nuclear program on alert. More from a defensive position.

The USD index (not the perfect way to value the dollar) has rallied to a technical level that is critical. Currently dealing at 96.50, the next major area of resistance is 97.50, above that 102.50. (see attached chart). Oil prices held stable and closed the week at $92.00/bbl. A surprising market reaction, given Russia’s oil production. At the time of writing crude is dealing at $96.50. The U.S. 10-year is trading at 1.96% as safe haven buyers continue to move in and keep rates steady.

This week, and the next several, will be defined by the Russian invasion but there are economic reports all week that are important. The U.S. will release the Chicago PMI (Tuesday), Market manufacturing, PMI new orders index and total vehicle sales (Wednesday), Fed Chair Powell testifies (Thursday) and the employment situation on Friday!

Technical analysis: The next several weeks and months will be dictated by news stories, which we will not be able to react to as quickly as the market. The below currency analysis will be based on technical analysis. By definition, technicians look at charts with limited input from news and economic reports. We are aware of these, but the market should be pricing in all that information and therefore the movements, patterns and price objectives are on the chart. 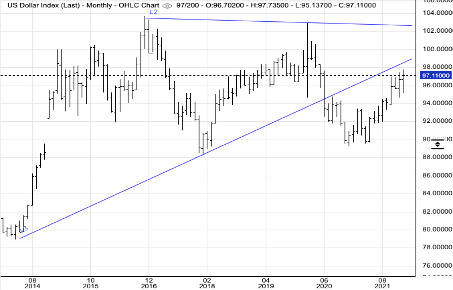 MXN (20.5500): Last Wednesday’s range of 20.78-20.23 has contained the peso. In other words, it is quietly dealing between those two levels with limited volatility. 20.2500 has been solid support in 2022, while 20.2100 remains a difficult level for the dollar to push above. It represents the 38.2% retracement level from 22.15 (Nov ‘21) and the low of 20.25 (Jan ‘22). We always suggest using any dollar rally as an opportunity to not only lock in a cheap spot level but also using forward contracts to take advantage of the large forward points.

CNY (6.3165): Moving away from the technical analysis, Chinese fighter jets did fly over Taiwan last week. Many analysts believe that China will not make any move toward Taiwan until after the Chinese Presidential “elections” in November. Three outcomes: 1) Xi JinPing is reelected to another term 2) he is given a life-time appointment as President or 3) a new person steps into the position. The PBOC does seem to be “holding” the currency at this current level but technically the USD seems to be oversold. A move above 6.3550 should open up a larger rally to 6.4160. Above that, the next target for the dollar is 6.6635. Support is 6.3000 and then the low print of 6.2360 (Apr ‘18).

Finally, GreenShootsFX thoughts are with the Ukrainian people, our NATO forces that are doing so much for the refugees, and Poland which has opened its arms and is welcoming them! Lastly, we keep our faith in the leaders of all countries that will work together to stop this atrocity!